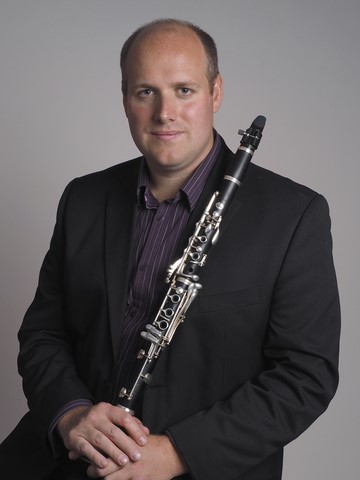 Christopher Stripp is a freelance clarinettist living and working in the south east of the United Kingdom. He leads a varied career encompassing solo engagements, orchestral playing, chamber music, teaching and conducting.
As a soloist he has performed concertos by Mozart, Weber, Krommer and Lutoslawski and is a Selected Artist for the Concert Promoters' Group 2015-16 season. In January 2015 he was a Park Lane Group Young Artist working closely with composers Joseph Horovitz and Paul Patterson. Recent and forthcoming appearances include concerts in the Purcell Room, St-Martin-in-the-Fields, St. James Piccadilly, Chichester Cathedral and for Derby Chamber Music, Wisbech Music Society and the Schubert Society of Britain.
Christopher is a regular guest principal with the Orchestra of the Swan and has performed with them both in this country and abroad including their recent tours to China and Turkey. He has played with the BBC Philharmonic and was on trial with them for the 2nd clarinet position in 2015. Further orchestral experience includes Sinfonia Cymru, Britten-Pears Orchestra, Stresa Festival Orchestra and in 2009-2010 he played for the Castleton Festival Orchestra under the direction of Lorin Maazel. Other notable conductors he has worked with include Simon Rattle, Gianandrea Noseda and Mark Elder.

Born in 1984, Christopher began playing the clarinet at the age of 11 and in 2000 gained a Music Scholarship to study with Patrick Shelley at Sherborne School in Dorset. He was a member of the National Youth Orchestra where he received coaching from John Bradbury, among others, who subsequently became his teacher at the Royal Northern College of Music in 2002. Christopher was a student on the ‘Joint Course’ with the University of Manchester and graduated in July 2005 with first class honours, completing his studies at the RNCM with Nicholas Cox in 2006. Christopher has been a recipient of the RNCM’s ‘Winfield/Grayam’ prize for solo woodwind and the Granada Prize for Chamber Music.

In September 2007 Christopher became a student on the MMus programme at the Royal College of Music and was a scholar generously supported by a Wilkins Mackerras Award and an HR Taylor Trust Award for Clarinet. He studied with Barnaby Robson, Timothy Lines and Janet Hilton and in July 2009 graduated from the RCM with Distinction.